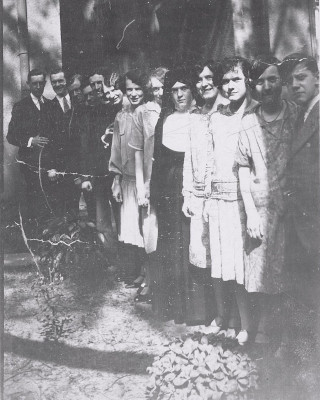 For me, "the Pooles" will always mean my father's family. Their quirks dominated much of my childhood and things about them still come back to haunt me today. My dad, Charles Thomas Poole, was one of 13 brothers and sisters, all shown in the picture.

In this photo they are lined up in the back yard of the family home at 8782 115th Street in Richmond Hill, Queens, New York, a location I recognize very well from my childhood. From front to back, we have Tom, Margaret, Theresa, Loretta, Catherine, Monica, Agnes, Mary, Jim, Charlie, Jack, Joe and Bill.

These are all the children of William W. and Mary E. Poole, my grandparents. It includes Agnes, who died in 1932. The picture shows Jack, James and Catherine in their religious dress, while Theresa and Margaret are still "civilians." Catherine took her vows on the feast of St. Joseph, March 19, in 1928. Teresa took hers on August 2, 1931, which narrows down the window of possible dates for the photo.

William was born in Rosenallis, Queens County, Ireland in January, 1862 and emigrated to the United States in 1889, according to info given in the US Censuses for 1900 and 1910. The earliest US record of William I have found is in the 1892 New York State Census. He is 29 years old and works as a carpenter. He is living at 73 Schenectady Avenue in Brooklyn. Although he told the census-taker that he was already a US citizen, he had probably only filed his "first papers" at the time. He formally became a citizen on July 23, 1894.

Living at the same address, in what was probably a tenement, and listed immediately before William in the census document, we find the Head family, including a daughter Mary E. Head, called "Minnie", who became William's wife in 1897. In fact, the Heads actually show two daughters of the same name, which creates a bit of a puzzle that I wrote about in another post, The Two Minnies.

The 1900 US Census shows William and Mary now living at 452 Sixteenth Street, Brooklyn. They have been married for three years and already have three children: William (born in August, 1897), Mary (August, 1898) and John (November, 1899). These are the folks I was later to know as Uncle Bill, Aunt Minnie and Uncle Jack (Father John Poole).

By the time of the 1905 New York State Census, three more children have come along. Agnes was born in 1902, Charles (my father) in 1903 and Joseph in 1904. William is still working as a carpenter. They have moved to 1728 Pacific Street in Brooklyn.

The 1910 US Census shows three more kids (James, Monica and Catherine) for a total of nine. They are living at 98 Truxton Street, still in Brooklyn. With more children being born, they must have been forced to find new housing pretty regularly.

True to form, the 1915 New York State Census finds them living at 174 Hull Street, with four more children, Loretta, Theresa, Margaret and Thomas. Thomas will be their last child.

William dies in February of 1918 Mary is left as a widow with 13 children, aged 3 to 20. Shortly thereafter, she moves with her children to 29 Euclid Avenue in Cypress Hills. This is a new address, not previously known. Because they moved twice between two censuses, it was not listed on either of them. However, in filling out the form for his draft card in August 1918, son William listed his mother as a person to contact, giving that address.

The 1920 US Census shows the family living in Queens at 257 128th Street. Unfortunately, that's no longer a valid address and I puzzled over it quite a bit. However, the 1925 New York State Census, shows them living at 8479 127th Street. After some research, I have concluded that it's actually the same house. Streets and houses were being extensively renumbered during this period and I believe that's what happened here.

In the 1930 US Census we finally see them in Richmond Hill, Queens, at 8782 115th Street, the house in the photo and the one I knew as their family home. By this time, four of the 13 children have left home: William is married and John, James and Catherine have entered their respective religious orders.

Before I researched the family, I had assumed that William purchased the house in Richmond Hill, but it turns out he never saw it. Mary, his widow, somehow managed to provide with the help of her children. In the 1930 Census, the government was interested in seeing how many families were adopting the latest technology, so there was a column to indicate who had a radio. The Pooles had one! The house itself had a valuation of $10,000, which must have been an enormous sum for them to come up with.

In the 1940 Census, son William is back home and is listed as a widower. Thomas has returned from military service and is living at home along with Mary (Minnie), Monica, and Loretta. Agnes died in 1932 and the others have left home.

Of the 13 children, six sons and seven daughters, five entered religious orders. John and Jim became priests while Margaret, Catherine and Theresa became nuns. Loretta entered the convent but left it. None of the daughters ever married and Monica, Minnie and Loretta continued to live in the family home after their mother's death in 1944. Known to us as "the girls" they ruled the family throughout my childhood. When times were tough, my mother's ability to get along with them helped us more than I ever realized at the time.

More to come as I ponder further about the Pooles...