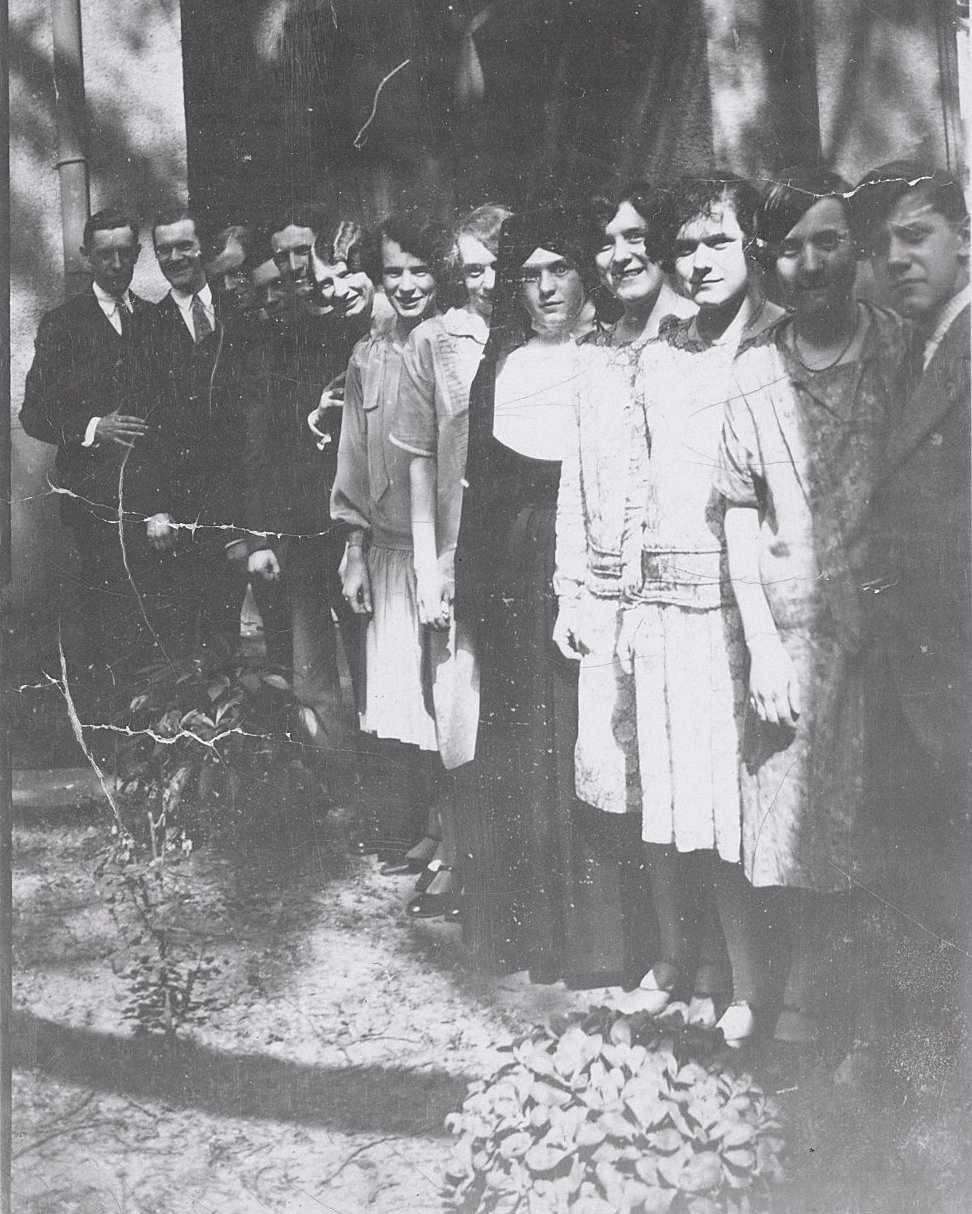 For me, "the Pooles" will always mean my father's family. Their quirks dominated much of my childhood and things about them still come back to haunt me today. My dad, Charles Thomas Poole, was one of 13 brothers and sisters, all shown in the picture.

In this photo they are lined up in the back yard of the family home at 8782 115th Street in Richmond Hill, Queens, New York. From front to back, we have Tom, Margaret, Theresa, Loretta, Catherine, Monica, Agnes, Mary, Jim, Charlie, Jack, Joe and Bill.

These are all the children of William W. and Mary E. Poole, who were married around 1897. The picture must have been taken in the early 1930s, since it shows Jack, James and Catherine in their religious dress, while Theresa and Margaret are still "civilians." It includes Agnes, who died in 1932.

William was born in Ireland in June, 1865 and immigrated to the United States in 1889, according to info given in the US Censuses for 1900 and 1910. The earliest possible record of William I have found is in the 1892 New York State Census. The entry there shows him as 29, which is two years older than he should be according to later census records. However, he is in Brooklyn and told the census-taker he worked as a carpenter, which is consistent with later entries. The 1892 entry shows him as born in Ireland but he was already a US citizen. Maybe they did things more quickly back then.

Mary was born Mary E. Head in August, 1875, in New York State. So far that's all I know about her early life.

The 1900 US Census shows William and Mary living at 452 Sixteenth Street, Brooklyn. They have been married for three years and already have three children: William (born in August, 1897), Mary (August, 1898) and John (November, 1899). These are the folks I was later to know as Uncle Bill, Aunt Minnie and Uncle Jack (Father John Poole).

By the time of the 1905 New York State Census, three more children have come along. Agnes was born in 1902, Charles (my father) in 1903 and Joseph in 1904. William is still working as a carpenter. They have moved to 452 Sixteenth Street in Brooklyn.

The 1910 US Census shows three more kids: James, Monica and Catherine. The 1920 Census finds Mary a widow, with four more children at home: Loretta, Theresa, Margaret and Thomas. She is now 44 and is the head of a household with 13 children, ages 5 to 22. They now live in Richmond Hill, Queens, at 8782 115th Street, the house I knew as the family home, maintained by "the girls" - my aunts Minnie, Monica and Loretta. I haven't found William's death certificate yet, but I'm guessing he may have passed away four or five years sooner. Otherwise, there would be more children! It's also not clear how or when they acquired the house. It must have been a big step for them, moving from Brooklyn out to Queens, and to a house of their own.

At the time of the 1930 census, they are still in the house. Mary, the mother, is now 54. Four of the 13 children have left home: William, John, James and Catherine. Presumably, the latter three had already entered their respective religious orders. The house has a valuation of $10,000 at this point, which must have been an enormous sum. In the 1930 census, the government wanted to see how many families were adopting the latest technology, so there was a column to indicate who had a radio. The Pooles had one!

The 1940 census finds son William back in the home and indicates he is a widower. So far, I have found no record of this first marriage. The form indicates he was living in Brooklyn five years earlier, in 1935. Mary (Minnie), Monica, Loretta and Thomas are still living at home. The others have left home or - in the case of Agnes - passed away.

More to come as I find more records...

Note: The next two sections are just outlines for pages I'd like to develop. The links currently lead to empty pages, which I'll eventually fill in.

You'd think there would be more of us, given the number of people in the picture above! But only four of them had offspring: Tom, Charlie, Joe and Bill.

Thomas Poole married Eileen Byrnes and they had one daughter, Eileen Poole. Locating my cousin Eileen after all these years was what inspired me to create this site.

Joseph Poole had at least two children and moved to Philadelphia quite a long time ago. We are not in touch with his descendants yet, but we're working on it.

William Poole was married, widowed and then married again. He and his second wife Muriel [?] had one child, William Poole, known to us as Billy. We know Billy has passed away and have contact info for his widow Carol so maybe we'll learn more there.

Eileen has a daughter, Christine and a grandson Jamie.

Eventually, there will be pages for all these people.